The Punxsutawney Phil of the Insect World 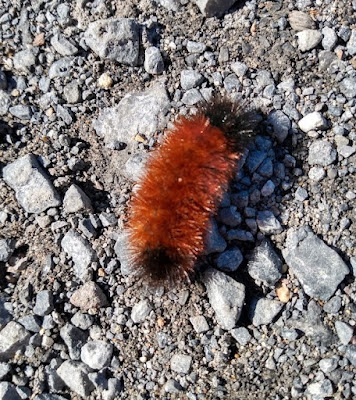 My husband and I came across this little critter during our walk this morning.

The woolly bear caterpillar is a common sight in fall. Did you know there is a folklore associated with its brown and black segments?

From the one that we saw today, it looks like it’ll be mild in the coming months. 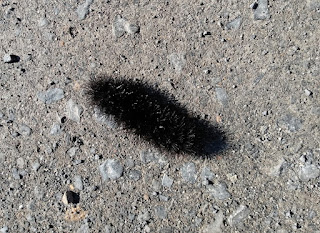 The woolly bear is the larva of the Isabella tiger moth. In fall, it looks for a dark and sheltered spot in which to hibernate.

Don’t confuse the woolly bear with another caterpillar that has a thick coat of all-black bristles. That is the larva of the giant leopard moth, another common sight in fall.

The giant leopard moth caterpillar also has red or orange bands between its segments, which can be seen when it rolls into a defensive ball. Like the woolly bear, it hunts in fall for a safe spot in which to curl up for the winter.

Both types of caterpillars are not poisonous and it’s okay to touch them (gently!).