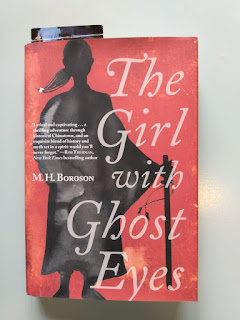 In The Girl with Ghost Eyes, author M.H. Boroson has created a fantastical world filled with beasts and beings from Chinese myth and legend. What’s more amazing is that the author made me view my culture with new eyes.

The book is set at the end of the 19th century in San Francisco’s Chinatown. The protagonist Xian Li-lin is a young Chinese immigrant who is a Daoist (or Taoist) ghost hunter and martial arts expert. Her “yin” eyes allow her to see the spirit realm.

It’s tough enough that Li-lin has to navigate a strict culture in which women have little power and almost no voice. As a widow, she has no husband to give her status. She is in a country that doesn’t understand her customs. Her problems are compounded when her father, a powerful Daoist exorcist, is seriously injured by an evil sorcerer. She is left alone to face an evil that threatens Chinatown with widespread death and destruction.

The book is beautifully written, with evocative language that transports the reader to a Chinatown where the supernatural exists alongside the prosaic. Here, you are as likely to encounter a goblin or a ghost as a gangster who works in a gambling den. The action is nonstop, starting right from the very beginning and not letting up until the end.

If I’ve one complaint, it’s that Li-lin is almost always fighting. She is placed in one perilous situation after another, which she surmounts with her fists, her weapons, her magic and her quick thinking. I would have liked a little more variation in pacing.

My favorite part of the book is its memorable characters. Boroson has taken tropes that are familiar to me as a person of Chinese descent, and given them his own unique spin. I mean, I grew up watching Hong Kong movies about “yaoguai” (weird beings), pugilist monks, and Taoist priests armed with peach wood swords and talismans.

Boroson’s characters include a monk whose shadow is an ancient tiger with three tails. There is a walking, talking eyeball who likes taking baths in warm tea. Li-lin befriends a cat spirit who loves fighting and fish oil. Li-lin’s father is a proud man whose faith is based on purity and perfection. Her nemesis is a soulstealer.

I loved it all. This is a book that will stay with me.