In this post, I thought I’d explain why the second book in my urban fantasy series is set in a Chinese temple.

To be clear, the Heavenly Bridge Temple in The Forgotten Guardian is wholly fictional. There is no temple at the far edge of Washington, D.C.’s Chinatown, as far as I’m aware.

I thought it would be an ideal site for Joe and Junie’s next adventure because I’ve always regarded Chinese temples as mysterious places. Where better for magic and mayhem to occur?

I can still remember how hazy the temples were inside. The smoke from the candles and incense was so thick it made me cough and my eyes tear up.

My fictional temple is based loosely on Thian Hock Keng, one of the oldest Chinese temples in Singapore. Construction on Thian Hock Keng (or the “Temple of Heavenly Happiness”) began in 1839 and was completed in 1842. Reportedly, no nails were used to build the temple.

Thian Hock Keng’s patron or main deity was Mazu, a Chinese sea goddess. Early Chinese immigrants (largely from the Fujian province in southeastern China) came to the temple to give thanks to Mazu for their safe voyage from China to Singapore across the South China Sea.

Today, Thian Hock Keng is as much a tourist destination as a house of worship. I used it as the basis for my setting because it left such a deep impression on me. At the time that I visited, some of Thian Hock Keng’s gods were so old and heavy with soot that they were little more than black stumps with eyes. The temple has since undergone a major restoration. The lovely dragons that adorn its roof ridges have now been returned to their full glory. 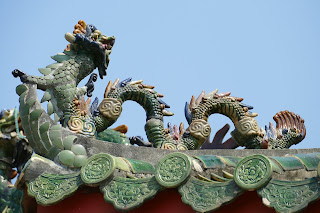 My temple, like Thian Hock Keng, is built in the traditional southern Chinese style of architecture for houses of worship, where a main courtyard is surrounded by a group of buildings. The usual structures are the entrance hall, the main hall and the rear hall. It is common in Chinese temples to house a main deity as well as a host of other deities.

In the Heavenly Bridge Temple, I decided to include the Sanxing (literally, “three stars”). They are Fu, the god of fortune; Lu, the god of prosperity; and Shou, the god of longevity. The three usually are depicted as old, bearded wise men. 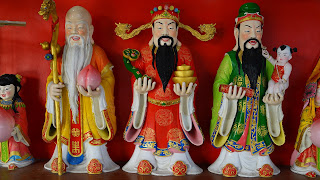 Chinese temple roofs are curved because the Buddhists believed that evil spirits don't like curves.

Dragons and phoenixes are common ornaments on temple roofs. The dragon symbolized imperial power. In Chinese mythology, the dragon also controlled rain and water. Accordingly, the dragon was thought to protect temples and other important buildings from fire.

In Chinese folklore, the phoenix was the king of birds and also an auspicious omen. 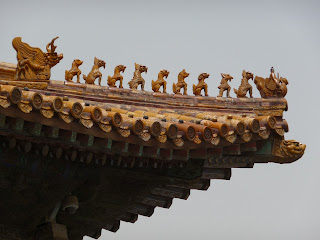 Some of China’s ancient palaces and temples also have “ridge beasts.” These ceramic mythical animals are lined up on the buildings’ roofs. Feng shui practitioners of yore believed the beasts helped to chase off evil spirits.

The dragon and phoenix were commonly placed together because their pairing was thought to usher in good luck and good fortune.

Other common ridge beasts included the lion (representing majesty and heroism) and the horse (representing loyalty). The “douniu,” a creature with a dragon body and an ox head, was believed to protect buildings and prevent disasters.

(Note: these stock photos are from Pixabay.com. An actual photo of Thian Hock Keng can be viewed here.)