Exploring the Swords of ‘The Forgotten Guardian’ 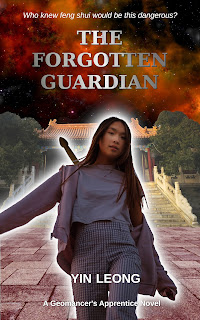 Since swords appear in Book 2 of my Geomancer’s Apprentice series, I thought it might be useful to provide readers with a historical or real-world context for them.

Not to worry—there are no spoilers here.

To recap, my urban fantasy series revolves around two geomancers based in Chinatown, Washington, D.C. They use feng shui to tackle ghosts and monsters in the D.C. metropolitan area.

There are five kinds of swords in The Forgotten Guardian, the second book in the series. One of them is Junie Soong’s weapon, which was introduced in the first book, The Geomancer's Apprentice.

The other swords are the wushu jian, the katana, the wakizashi, and the tanto. Curious as to why there are Japanese swords in a fantasy steeped in Chinese myths and magic?

Well, I guess you'll have to read the book.

Junie’s sword is known as the Energy Devourer. It’s made from the wood of a peach tree cut from the Shen Ting Mountains’ sacred groves.

The Energy Devourer is roughly based on the peach wood swords used by Taoist priests in exorcism rituals. Taoism, or Daoism, is an ancient Chinese philosophy and religion that emphasizes living in harmony with “the path,” that is, the natural order.

Peach wood has a special place in Chinese mythology. According to one legend, there was a giant peach tree on Dushuo Mountain whose branches formed an arch through which evil spirits could enter the human realm. The Emperor of Heaven assigned two brothers to guard the portal. If the spirits did harm, the brothers captured them and fed them to the tigers that roamed the base of the mountain.

The ancient Chinese venerated the brothers as Door Gods. Their images were carved on peach wood and hung at entrances and doorways to keep evil out.

The Chinese word for peach also sounds like “flee,” or “run away.” Peach wood was used to make charms in the shape of swords, arrows and other objects, in the belief the wood could drive away evil.

“Wushu” is the term for Chinese martial arts. The swords—or “jians”—used in wushu training and competitions are long, narrow and straight. The metal blades are flexible and double-edged. They are designed to make a sound when shaken. A tassel is attached to their pommels for visual appeal.

The katana is a single-edged, curved Japanese long sword. It is about 2 to 2.5 feet long with a hilt that can be held in both hands. Historians believe the katana was invented during Japan’s Kamakura Period (1185 to 1333) when a better sword was needed to fight off invading Mongol forces.

Samurai warriors carried the sword with the cutting edge facing upward. Today, the katana is one of the most iconic swords in the world.

The wakizashi is another traditional Japanese sword. Like the katana, it has a curved, single-edged blade. However, it is shorter than a katana, with a blade that is about 1 to 2 feet long.
The sword has been around since the 15th or 16th century. It was a backup sword that also was used for close-quarters fighting or to behead the enemy. During Japan’s Edo Period (1603 to 1867), the Tokugawa shogunate required samurai, or the warrior class, to carry both the katana and the wakizashi. When worn together, the swords are called “daisho” (literally meaning “big” and “small”). Samurai were the only ones allowed to wear the daisho.

The tanto is yet another traditional Japanese sword that was mostly carried by samurai. The sword dates back to Japan’s Heian Period (794 to 1185). Its blade is about six to 12 inches long and can be single- or double-edged. It is primarily used as a knife for stabbing or slashing.