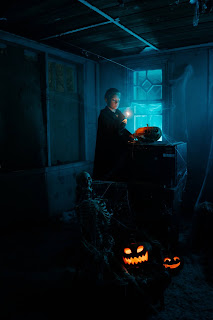 For those who haven’t seen the movies: The Houses October Built and its sequel are found-footage flicks about five friends who embark on a road trip to document some of America’s scariest haunted house attractions. Their filming provokes a few of the haunted house staff. They find themselves in even deeper water when they try to track down an underground extreme haunt known as the “Blue Skeleton.”

Hell Fest features a group of teenagers who bump into a serial killer when they visit a horror-themed amusement park. The park is basically one giant haunted house.

The movies aren’t bad, and they’re a must-watch for anyone who loves haunted houses. For me, I don’t get the lure of the attractions.

Full disclosure: I’ve said this before in the blog. I was terrified years ago at a haunted house in Eugene, Ore., run by the Jaycees. I was ready to leave halfway through. The actors grabbed people. They popped out when least expected. They looked horrible. In other words, it was a run-of-the-mill haunted house. However, it was overwhelming for me. My senses were overloaded.

It turns out that I enjoy horror best when it’s vicarious. I like it on a page or on a screen. I don’t need to be there. I don’t need to be surrounded by actors with gory makeup. I definitely don’t want to be chased around by a chainsaw-wielding maniac.


That said, kudos to the people who enjoy such attractions. I’m even more impressed by those who like extreme haunted houses. Can you imagine that as part of the experience, some people voluntarily opt to be waterboarded, or closed up in a coffin, for the fun of it? Hello, it’s called “torture” when the CIA does it. But hey, different strokes for different folks.

I also want to make clear that I love it when people turn their residences and yards into haunted houses for Halloween. It’s wonderful to see these homeowners’ dedication to the science and art of fear. Thank you for helping to entertain us horror fans.

If you're interested, there is a fascinating documentary on these small-scale scaremongers called Haunters: The Art of the Scare (2017). The documentary is streaming on The Roku Channel and Tubi.