Exploring the Folklore Monsters in the ‘Geomancer’s Apprentice’ Series 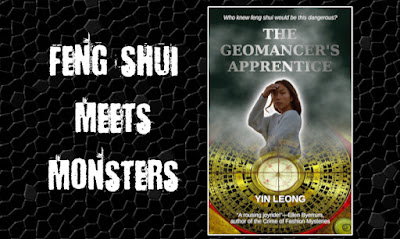 I haven’t blogged for the past two weeks because I’ve been busy preparing my manuscript for a beta reading. It’s the forthcoming second installment of my Geomancer’s Apprentice series.

Today I thought I would discuss yaoguai and mogui, the two types of monsters that appear in the books.

Yaoguai means “weird devil” in Mandarin, China’s official language. In Chinese mythology, a yaoguai is the malicious spirit of an animal, a plant or even an inanimate object. Yaoguai have magical powers that include the ability to transform into humans. They seek immortality because they want to be treated like gods. These monsters just want a little respect, like the rest of us.

Yaoguai aren’t all evil. According to some texts, yaoguai may also be gods who transgressed the heavenly laws. As punishment, they are demoted to yaoguai and must live out their days among humans.

The most common example of a yaoguai is the female fox demon, or “huli jing.” Such demons usually take the form of beautiful temptresses.

Yaoguai have been entrenched in Chinese folklore and literature for centuries. For example, Madame White Snake—one of China’s most famous folktales—is the story of a white snake spirit who falls in love with a mortal man. The story is believed to have been part of a collection of Chinese legends first published in 1624.

Another classic book, The Investiture of the Gods, features three yaoguai who turn into beautiful women to seduce the king of Shang, leading to the fall of the dynasty (1600 to 1046 BC). The yaoguai are a thousand-year-old vixen, a nine-headed pheasant and a jade pipa. The pipa is a four-stringed traditional Chinese musical instrument that looks like a lute and is plucked like a guitar. Remember I said yaoguai could include inanimate objects?

The Investiture of the Gods is believed to have been published in book form sometime between 1567 and 1619. The book consists of 100 chapters.

Yaoguai also appear in Journey to the West, one of China’s four great literature classics, and probably the most well-known and popular. The earliest full-length version of the book is believed to have been published in 1592. The book describes the epic journey undertaken by a monk who travels to Central Asia and India to retrieve sacred Buddhist sutras. His three bodyguards, of course, are the monkey king Sun Wukong, and two yaoguai: a pig-faced demon and a flesh-eating demon.

The bodyguards have to protect the monk against other yaoguai who want to eat him, believing they can gain immortality by doing so. These other yaoguai include a shape-shifting demoness whose true form is a skeleton, and a king who is a bull demon.

When I lived in Singapore, I watched many Hong Kong and Chinese film adaptations of these literature classics. When it came to my urban fantasy series, however, I decided to take a different approach to yaoguai.

My books' main character, Junie Soong, is a feng shui geomancer who can manipulate qi, or vital energy. The yaoguai that she fights are ancient beings who come through portals to the mortal world to feed on sha qi, or murderous energy, so they can live forever.

“Mogui” is Mandarin for “evil ghosts” or “demons.” It’s “mogwai” in Cantonese, a Chinese dialect that was at one time the most commonly used Chinese language in the United States.

In Chinese folklore, mogui are malevolent devils that breed at certain times of the year. In Chinese popular culture, however, mogui have come to mean vengeful ghosts.

It was interesting to see how mogwai were depicted in the 1984 movie Gremlins. In the flick, Gizmo is a mogwai who, when fed at night, spawns evil offspring that delight in wreaking havoc.

In the Geomancer’s Apprentice series, mogui are even more ancient than yaoguai. They are known by many names, including the Prime, the Ancients and the Alpha. They’re shape-shifters like the yaoguai, except even more terrifying. When summoned or awakened, their sole aim is to bring about wide-scale death and destruction.