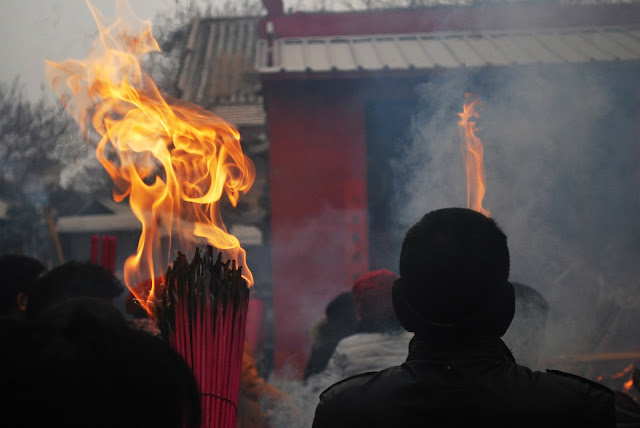 Folklore is a rich source of stories, especially for the horror and urban fantasy genres. I thought I would share a Chinese festival—the Hungry Ghost Month—that starts August 8.

During this period—which is the seventh month of the lunar calendar—Chinese people of the Taoist or Buddhist faiths believe the gates of hell open and hungry ghosts wander the earth in search of food and entertainment. People of Chinese descent burn ghost money and ghost goods, such as paper-mache cars, cell phones, houses and jewelry, to ensure their ancestors are well taken care of in their afterlife.

When I lived in Singapore, the air would be thick with smoke from the burning of incense and the joss paper products. There would be burnt patches outside people’s homes and in fields and on cement walkways. Offerings of food and fruit would pop up at makeshift altars all over the island.

The Hungry Ghost Festival also is a time for live (and loud) musical performances so as to placate the ghosts and spirits. Traditionally, these were Chinese operas. Nowadays, they’re more likely to be singing, dancing or comedy shows known as “getai” that are performed on temporary stages. One warning: the first row of seats is reserved for the dead, so try not to sit there.

On the 14th or 15th day of the festival, some people will serve large feasts on offering tables for the dead. Some cultures also light lanterns in the shape of lotus flowers and release them in rivers. As they float away, the lanterns help guide the spirits back to where they belong.

The Ghost Month is a time of bad luck, so it’s best not to undertake any major business dealings. In addition, don’t get married or schedule surgery. Since ghosts are particularly active and prevalent at this period, you shouldn’t stay out too late, and definitely stay out of the water.

Stick to crowded areas at night, and don’t answer if someone calls your name after dark. Take care not to accidentally step on or disturb any makeshift altar or offering in case you offend a feeding spirit.

To ensure a wandering ghost doesn’t attach itself to you, keep jade on your person—it’s both a lucky as well as a protective charm.